Letter from Birmingham Jail: an Evaluation 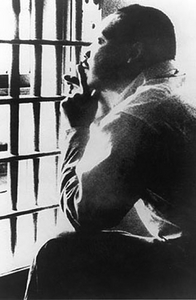 Martin Luther King Jr. was arrested and sent to jail because he and others were protesting the unjust treatment of blacks in Birmingham, Alabama. On April 16, 1963, King wrote a letter to clergymen highlighting segregation, inequality, and injustice in Birmingham. Although the “Letter from Birmingham Jail” was written 56 years ago it still rings true in 2019 in many ways. He gives a historical, religious, and socio-economic background of the oppressed people throughout history by comparing it with the oppression of the blacks in Birmingham due to segregation.

In the beginning, King alludes to many kings of the past such as Socrates and Apostle Paul to inform readers about strategies that were used to solve past dehumanizing issues. Similarly, he also writes about how religion was spread by Christ and other leaders by comparing himself to Apostle Paul- except here King is spreading the word about equality and justice for all. Religion played a role in King’s life from when he was a young boy to an adult who fought for justice. Further, King writes that due to segregation there is an immense amount of imbalance between education, housing, jobs, and in every aspect of living segregated.

King understood that African Americans needed help but whites lack the motivation to help. He began the process of organizing his nonviolent violent protest through “direct action.” Before beginning protests, however, protestors were notified about “self-purification,” to determine whether they were ready to work nonviolently and suffer indignity and arrest. When they decided they could, they then prepared to protest. Protest alone wasn’t going to initiate change, so he decided to negotiate with the clergymen which failed. King decided to create “tension” which will bring light to the issue and forcing people to act. He provides examples that suggest tension is necessary for humans to grow and repeats that the tension created by direct action is necessary in this case if segregation is to end.

King transitioned into discussing just and unjust laws. He defines just laws as those that uphold human dignity, and unjust laws as those that degrade human personality. According to King, segregation is unjust because it gives whites the authority to force blacks to do dehumanizing things. He argues that his idea of “civil disobedience” is just and people should want to take part. To support King’s point, he notes that the laws of Nazi Germany allowed for Jewish persecution would have been broken to protect the oppressed. Unjust laws should be broken to protect those that are maltreated.

As King finishes, he reflects on his disappointments. First was the white moderates who valued “order” over “justice.” The second was the white church for remaining silent towards the issues of injustice, inequality, and segregation. He argued that some leaders in the church “[refuse] to understand the freedom movement and have remained silent behind the anesthetizing security of stained glass windows” (King, paragraph 34). This reveals that although King loves the church, white Southern leaders failed to speak up on the issue of injustice causing blacks to suffer even more.

King closes out by apologizing to the clergymen for the length of the letter but hopes they will understand the forces that have led him to such certainty. He wants them to act and not blame the victims for all the violence done to them.

Furthermore, “Letter from Birmingham Jail” is inspiring, convincing, and motivating. The letter gives me the motivation to want to make a change for my community. It saddens me that today African Americans are still facing the same injustice blacks were facing 50 years ago. I believe that people with authority in this generation are making King’s fight for justice pointless. He and others fought for blacks to get justice but things such as police brutality and profiling being current issues illustrate that change is not consistent. As an African American woman, I’m forced to watch my surroundings at all times because there are still a lot of unjust treatments happening to people like me. Injustice makes the world we live in corrupt.

As I finish reading this powerful piece, I found some quotes that might draw a person to read the whole letter. The first quote that stood out to me is: “Injustice anywhere is a threat to justice everywhere” (King, paragraph 4). Martin Luther King is saying that people cannot conceive of themselves as separate from all the other people in the world because what happens to one will eventually happen to all. Injustice is like a disease and once it’s in one place it’s bound to spread elsewhere. Another quote that will hopefully get a person’s attention is “We know through painful experience that freedom is never voluntarily given by the oppressor; it must be demanded by the oppressed” (King, paragraph 13). Oppressors don’t want to give their victims any freedom, the victims must fight for it. Oppressors will not give up freedom without any effort from the oppressed. Hopefully, pulling out these two important quotes will give the general population a better understanding of ideas brought up in this letter.

I want people to understand the importance of King’s civil disobedience and the main reason why he did it. They should continue his fight to make a change. Advocate for the black community and persuade others to join and fight for justice.

Although the writing was brilliant, powerful and motivating, King still faced many criticisms. King was called an outsider/extremist, some bashed him for “inciting violence,” and others criticized him for calling people out by their names. To combat all those criticisms, he uses metaphors and vivid descriptions to bring awareness to the discrimination occurring and seek support from the clergymen and the church to help end the awful treatment against African Americans.

Martin Luther King uses metaphors to persuade the clergymen to look beyond themselves and try to put themselves in the shoes of African Americans. For example, Kings compares “quicksand” and “racial injustice.” Using the metaphor “quicksand” provides urgency to the issue of injustice. Like quicksand, racial injustice is constantly sinking in America’s culture and more people are in danger. Both injustice and quicksand have a negative connotation and they’re both things that cause destruction.

Additionally, King provides a vivid description when he talks about racism in Birmingham. King states, “Birmingham is probably the most thoroughly segregated city in the United States. Its ugly record of brutality is widely known. Negroes have experienced grossly unjust treatment in the courts” (King, paragraph 6). These facts cannot be disputed, and they clearly show the prejudice African American faces in Birmingham. This description helps the reader visualize the traumatic experience blacks went through to fight for justice.

Not only does the letter highlights the injustice through the usage of literary devices but also it reveals how people treated because of their culture. To support this idea, in “Mother Tongue” by Amy Tan, her mother’s identity was taken from her because she couldn’t speak proper English. Also, in “The Myth of the Latin Woman” by Judith Ortiz Cofer, she was stereotyped because she is from Puerto Rico and that culture is different from America’s culture. In the letter, King reveals how black men are called “John” even if that wasn’t their name. In all three writings, the common theme is people getting stereotyped because of the different cultures. If a person’s culture is different for the American culture then they are more likely to be judged and get mistreated. Society embedded the idea that American culture is more important than any other culture. The first step to change is for people to stop putting one culture over the others because all cultures are just as important.

In short, Martin Luther King informs readers about the injustice in Birmingham by using tactics that helps him put his own voice in the writing. Doing so makes it easier for the audience to have a connection with the letter which will eventually make them want to change society’s values and norms.

Cofer, Judith Ortiz. “The Myth of the Latin Woman.” 1993. The Norton Field Guide To Writing.